Well we’ve watched an amazing game here in Kiev tonight. There were big points available in the Eastern Western Basketball League tonight but, once again, the Obama Saints came unstuck and now have a zero-four record against EBL teams this season.
I’m now with Saints coach Mr Obama at pitch side. Mr Obama. Were you worried in the lead up to this game?’

‘Were you worried Sir’

‘Hell yeah, of course I was…. as the Brits put it, I was crapping myself, I tend to be worried most days. I don’t know if you know but as well as coaching the Obama Saints, I have a part time job running America’ 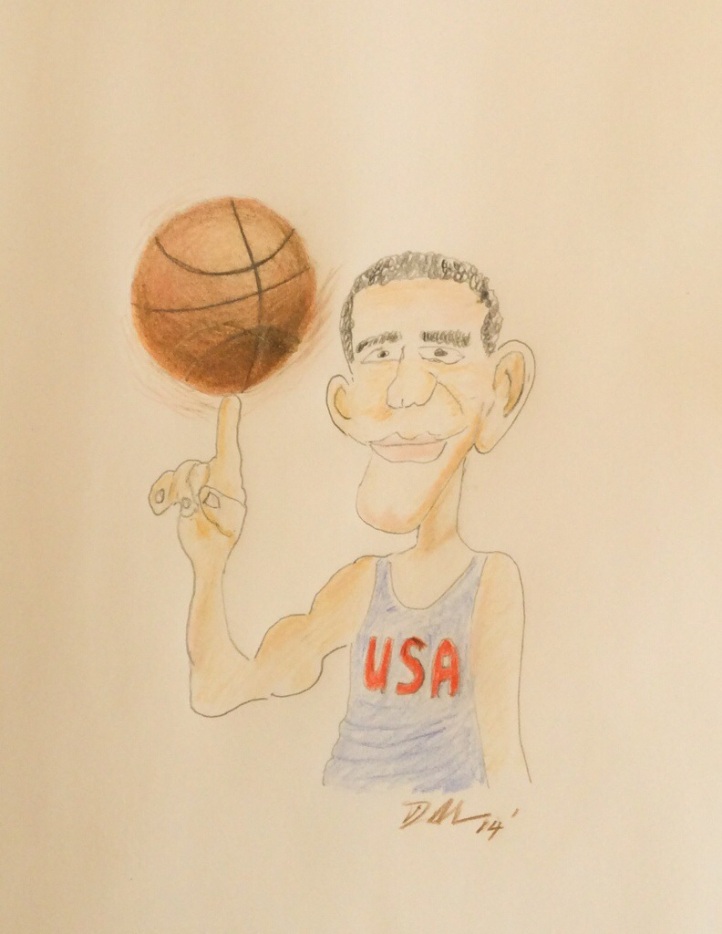 ‘Wow, I didn’t know that Sir. Is that the reason you were unaware the Soviet teams had been training for months?’

‘Well, satellite images showed tanks, planes and thousands of soldiers but no basketball players, so, we didn’t really think anything abnormal was going on’

‘Yes ok Sir, I think we should move on to the game itself. The Saints seemed to start the first quarter slowly and you found yourselves twenty zero down within a very short time. What do you think went wrong?’

‘Well, we were asleep at the start, and when they annexed off our point and shooting guards, it was always going to be difficult’.

‘You seemed to change tactics in the second quarter with your players appearing to be talking to each other more…….?’

‘We encouraged them to use ‘strong words’……..its a well known tactic when your guards have been annexed and your Center is fast asleep……😳, in the 3rd quarter we used even stronger words, moving to using ‘rude gestures and pulling faces’ 😜 in the last quarter. However, they seemed to drain and eventually cut off our energy, especially to the European players in the team, at, what was, a critical part of the game. Eventually, their extra training, and, catching us with our pants down, ended, as you’ve seen, with a zero forty eight scoreline. I did think for a moment that we might have some luck, and have the game abandoned, when the spectator wearing the Queen of the South FC soccer shirt, ran across the game line and slapped Coach Putin with a #wetfish. However, it was not going to be our night’

‘So where do the Obama Saints go from here Sir…..?’

‘Well, we need to go off and eat some of Moms Humble Apple Pie, practice our strong words, funny faces and our rude gestures before the next game against the Ukraine Disturbers. I’m confident that if I do all the worrying others will..not..have…to worry’

‘Well, thank you Coach Obama, good luck. So there you have it, another crushing blow for the Obama Saints. Here’s hoping they can turn things around. We’ll finish off tonight with the results of tonight’s other games. And it’s not been a good night again for the WBL teams with Merkels Meerkats going down forty eight zero to the Crimean Annexers and the Moscow Marauders thrashing the EU Papershufflers by forty eight to zero. I hope you enjoyed the game, I’ve been Tony Preccario, have a good evening’

It’s just new blinds Maisie 🤭🤭🤭
The Future 🤣
Sunset last night ✅
Da hens ❤️
Hey garden ❤️❤️
Our new friend 😁
Clip from one of my stories on my blog 57millionthbestblogintheworld.com 🤗
Visitor to the yard
Glasgow to Heathrow turning over Dumfries
Join 2,254 other followers

A trip through life with fingers crossed and eternal optimism.

The world around through my camera's lens

Everybody has a story. Here's a little of mine.

Write your best story. Change your life. Astound the world.

I write humorous essays, comedy sketches, rants, and sometimes even poetry if you're lucky. Silly, opinionated, honest, and prone to cynicism.

But I really ought to be doing something else....

words to inspire and empower

Why search for Paradise, when its right in front of you!

The Musings of a Writer / Freelance Editor in Training

Surreyfarms. A serene haven in the foothills of Northern California

recipes and stories from our home

Musings of a Wandering Dryad