When you’re a reporter for The Times, you can find yourself in many far flung places. 24 hrs after arriving in Southern Scotland, I found myself at Torthorwald Village Hall for the #TAFTAS (Torthorwald village Annual Film and Twitter awards). Yesterday, the place had been empty, but tonight the hall was packed. Where had all these people come from?
The hall looked nothing like it had the day before. Yesterday, wooden floorboards, bare tables and the odd cobweb. Now, glitter, diamonds and shine filled the room. 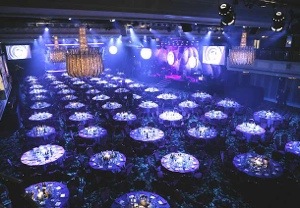 I knew it wasn’t going to be an ordinary evening, as, when I went to sit at the only empty table, “ouch” came the cry, as a lowered myself onto, what I thought was an empty chair.
“This table is for #camouflageclub members only!”
“Oops. sorry, I didn’t see you……..you’re good…….very good…….apologies”
Old Jimmy appeared, and pushed me to where I should have been sitting. I found myself sitting next to an enormous, but seemingly friendly guy, who introduced himself as Fat Eck, a glamorous, but really pink, friend of his, who Fat Eck introduced as Freaky Fiona, an old farmer called Broon, and an even older foreign sounding woman, called Hilda.
“HI, I’m Stephen, I’m a reporter with the Times. Pleased to meet you”
They generally nodded in my direction, in that ‘we won’t like you until you buy us a drink’ sort of way.
“Can I buy you all a drink?” Heads nodded in approval.
15 minutes later they were chatting away like I’d known them all my life.
‘We haven’t a clue what’s going to happen. We were told we were nominated, told to turn up tonight, and, that was about it really’ said Hilda in a slightly Germanic tone. ‘I am up for Best Comedy Writer with Herr Broon and that qosfc 1929 or whatever he is called. Do you know he has a Yak and a Dodo!’
I smiled politely at the Dodo comment. Although she was the second person to say the same thing, it was obviously a ludicrous statement, which I blamed on the sherry I’d bought her 15 minutes previously.
So, no one seemed to know why they were really here, what was going to happen, or who they were going to see. I was starting to regret coming, with the alternative of a weekend with the in laws, now seeming a distant but brighter prospect.
Suddenly, without warning, the lights went down, the noise in the hall quitened and the curtain started to move. Two figures appeared on stage, waving as they approached their microphone stands. From where I was sitting, I could swear Ant and Dec had just walked on, but that theory was squashed as soon as they opened their mouths…
‘Harro errybuddy! We arra, Rant and Reck, impersonators from a China. We here in tofforrold to a present ra TAFTAS. Tank you very much, wey aye ra noo’
I should have realised at this point, with the arrival of a pair of Chinese Ant and Dec impersonators, in a tiny village in the middle of nowhere, this was going to be different. Nothing prepared me for what happened next…
‘Ok errybuddy, we hope u gonna enjoy show, to present the award forra Best Actor, all ra way from ra United States of Amerrica, issa, Meeser Tom Hanks’
I laughed for a second, and looked at those next to me, expecting them to be laughing too, but they’re eyes were transfixed, jaws dropping at a fast rate of knots. I turned my gaze back to the stage…..It couldn’t be, it simply couldn’t be, but it was…….there in the flesh, standing in Torthorwald Village Hall, was indeed Tom Hanks…….
As I grabbed my iPhone to take a picture, the audience rose to its feet clapping, apart from Hilda, who, at 93yrs old, had fallen asleep.
‘Hello everyone, it’s great to be here, in a particularly beautiful part of Scotland, thanks for inviting me. I’m here to present the award for Best Actor and the nominees are…….Crane for ‘Crane, Intergalactic Hero’…..Mad Malkie for ‘The Madboys’ and Fat Eck, also for ‘The Madboys’……and, the winner is…….Mad Malkie…..’
As the audience clapped, I was still trying to take it in. Tom Hanks, one of the most famous actors in the world was here, presenting an award to someone I’d never even heard of.
The audience looked round, presumably expecting Mad Malkie to stand up and be on his way to the stage. Suddenly, eyes veered towards the ceiling at the back of the hall. A guy in a Batman suit was crouched holding on to something. Next second he was off on a zip wire towards the stage.
‘Here he come errybuddy, Mad Makkie’ shouted Rant, as the guy in the Batman suit soared above us. The crowd chanted ‘Malkie, Malkie, Malkie’ as he hurtled toward the stage. As he got closer, the smiles on Rant and Recks faces disappeared, both ducking as he narrowly missed them. Tom Hanks had no such luck, as Mad Malkie took him clean out, knocking him to the floor.
Within seconds, Rant and Reck were bent over him, beckoning someone from the side. In the meantime, Malkie appeared to have gone clean through an open window at the back of the hall, not necessarily on purpose by the looks of things.
I could see my ex table mate, Freaky Fiona up on stage kneeling over Tom, apparently attempting mouth to mouth. Within a second or two, Tom was pushing her out of the way, rubbing his lips, which were now a shade of smudged pink , resembling the lipstick worn by his new medical assistant.
‘Sokay, errybuddy, Meeser Hanks essa ok’ scrambled a shaky looking Reck
Once Tom had been safely stretchered off, the audience settled back in their seats. I could hear someone shouting in an American accent from off stage. I assumed Mr Hanks wasn’t happy.

I later discovered, Mad Malkie had been arrested on charges of clumping a famous film star on a zip wire, with intention to daze, and, as Rant and Reck recovered themselves for the next award, was being questioned in the back of a police car.

I sat back grinning. I’d never seen anything like this since they set fire to James Corden at the Brit awards, surely the rest of the show would be an anticlimax after that opener……………

It’s just new blinds Maisie 🤭🤭🤭
The Future 🤣
Sunset last night ✅
Da hens ❤️
Hey garden ❤️❤️
Our new friend 😁
Clip from one of my stories on my blog 57millionthbestblogintheworld.com 🤗
Visitor to the yard
Glasgow to Heathrow turning over Dumfries
Join 2,254 other followers

A trip through life with fingers crossed and eternal optimism.

The world around through my camera's lens

Everybody has a story. Here's a little of mine.

Write your best story. Change your life. Astound the world.

I write humorous essays, comedy sketches, rants, and sometimes even poetry if you're lucky. Silly, opinionated, honest, and prone to cynicism.

But I really ought to be doing something else....

words to inspire and empower

Why search for Paradise, when its right in front of you!

The Musings of a Writer / Freelance Editor in Training

Surreyfarms. A serene haven in the foothills of Northern California

recipes and stories from our home

Musings of a Wandering Dryad